Every Thursday, Ooligan Press invites a poet whose work is included in Alive at the Center, our forthcoming anthology of poetry from Pacific Northwest writers, to blog for us. This week, we are pleased to feature Susan McCaslin, a poet from Fort Langley, BC. An earlier version of this piece was first published in the March 2013 issue of Common Ground. Please enjoy it!

The Han Shan Poetry Project: How Poetry Came to Save a Rainforest

Last Thanksgiving, my husband and I visited an old rainforest in GlenValley, Langley, British Columbia, not far from our home. We’d heard the Township of Langley was planning to sell it off to raise funds for capital projects.

As we walked through the forest, we paused at the base of a giant Black Cottonwood, possibly 240 or more years old. I’d fallen in love with a forest and become an activist.

This forest and a neighboring one had been publically owned for decades. The westernmost parcel, known as “McLellan Park West,” had been taken off the market because of public outcry led by a local group of residents called WOLF (Watchers of Langley Forests). In July, WOLF was given a two-month window to raise three million dollars with which to purchase McLellan Forest East.

Many felt it unfair to force residents to buy back land already belonging to them. Besides, shouldn’t there be other ways to raise funds for capital projects than destroying a rare, wild ecosystem?

It was rumored a local developer wished to selectively log and build private country estates. If this happened, the land would no longer be accessible to the public. It would cease to be a vital ecosystem providing suitable habit for the endangered Pacific Water Shrew, Oregon Spotted Frog, the blue-listed Red-legged Frog and Great Blue Heron.

Scientific reports had documented the ecological value of the forested areas, but the Mayor and Councillors continued to speak of the land as “inventory,” “surplus,” and “idle land.”

It takes a village to save a rainforest. But what can an artist do? It occurred to me that poets understand the intrinsic value of nature and out need for it. So I decided to organize “An Afternoon of Art and Activism” or “Art in the Park” in McLellan Forest East.

A week later, 160 high school students from the Langley Fine Arts School poured out of two big yellow buses to sketch, sing, and photograph the forest. After sharing their art in the woods, they organized a poetry reading and photo show of their own at a local café.

Next, my husband noticed an ad in the local paper announcing renowned wildlife artist Robert Bateman would be signing books in a nearby mall. He quickly emailed Bateman’s website, and within an hour or so, Bateman himself responded: “Yes, I’ll be there in the morning.”

Bateman commented on the irony of logging a vital ecosystem in order to build a recreation center elsewhere. “This is the recreation center, right here!” he said, gesturing to the earth. Shortly after, the story went national.

My poet friends were eloquent in their support for protection. Dispersed acrossCanada, many would be unlikely to come see the forest for themselves. How could their voices be present here?

Then I remembered studying the zesty poems of an old hermit monk from ancient China named Han Shan from Cold Mountain. There he scribbled poems on rocks and suspended them from trees. Han Shan was to become my mentor and muse. The Han Shan Poetry Project was born.

I put out a call for tree poems on the websites of the various writers’ organizations. Soon my calls appeared on people’s blogs and websites all over the world. Over 150 poems poured in within a week and a half, and within two weeks the number had gone up to over 200.

We placed the poems in plastic paper protectors, threaded them with colorful ribbon, and festooned them from the trees. Poems poured in from all over the lower mainland, Vancouver Island, other provinces, as well as New Mexico, California, Florida,  the UK, Australia, and Turkey. The exhibit included poems by major prize-winning Canadian poets like Lorna Crozier and Patrick Lane, Fred Wah (the Poet Laureate of Canada), and children as young as six years of age.

Poems pirouetted like white angels. Heavy drops of rain, frost, sprigs of moss, and bark covered them and seemed the forest’s way of claiming them. We advertised the event in the local papers as the forest’s anthology. Poet had set their small gestures of creative expression beside the vaster creativity of nature.

People arrived from all over the lower mainland to stroll through the woods, pausing to read the poems. Local visual artist Susan Falk donated a painting to the ongoing work of WOLF. The Opus Women’s Choir performed in the forest.

At the Langley Township meeting just prior to the December deadline, WOLF informed the politicians they weren’t able to raise the three million. A letter from the BC Ministry of Environment arrived that afternoon saying that, in response to recent government ecological studies, McLellan Forest should be protected as an “ecological reserve.” However, they would not provide funding to allow this to happen.

Within a few days, the Mayor and Council turned around, announcing the forest had been given another reprieve. A local newspaper declared McLellan Forest the “story of the year.”

In response to grassroots initiatives, in January of 2013, the Mayor and Council sent out a press release saying they were taking the parcels in the western part of the McLellan East off the market, while authorizing the sale of the four lots to the east. The community was greatly relieved that sixty percent of the forest would be saved. It was clear that without the public outcry, and months of work, the entire forest would have been sold.

Elation was qualified by disappointment, since the portion of land the politicians wish to sell contains some of the most sensitive habit for species at risk and endangered species.

Yet poets claim this union of arts and activism a victory for all. The Han Shan Poetry Project demonstrates that the arts have an untapped potential for transforming society. Art and activism can dovetail in remarkable ways. I would say this is because art pauses before beauty, raising the conflict between conservationists and developers beyond their various ends. It appeals to a common recognition of beauty in biodiversity.

An activist must live in the paradox of unknowing. For me, it wasn’t easy being in the process without attachment to outcomes. Yet there is always the consolation that nature holds us within a larger story, a more expansive narrative; that somehow our words and actions matter. 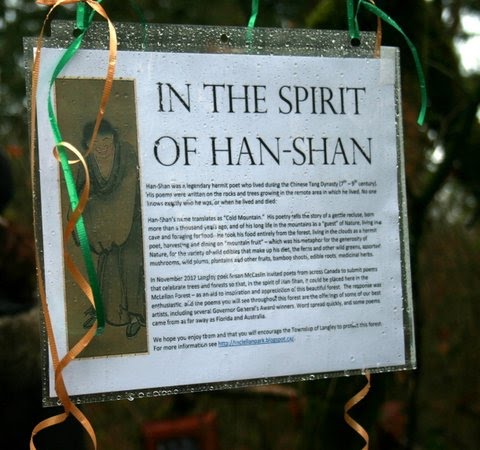 Yes, poetry matters, as old Han Shan himself could have told us.

The forest’s story is not over. McLellan Forest East and a  neighboring forest, McLellan Forest West have been taken off the market, but they are not yet permanently protected. If you wish to help, please write the Township of Langley and the Provincial government of BC, urging them to work together to designate McLellan Forest East as a park or ecological reserve both for the community and for posterity.

Three Poems for the Trees of McLellan Forest East,Fort Langley,BC

“I stood still and was a tree amid the wood…”

Your saffron leaves unselve us

honed to shape of tears

What would take you out,

hang for sale signs by the roadway

all in the name of development

breath in the moist greening

I fell in love with a forest

and became an activist

but first there was you

one, no, two, two cedars twinned

around the heartwood of a tree husk

two of you ascending

against the gods of progress

There are those who would chainsaw

and, yes, you pant toward union

under the sky canopy

bride-ing the soar of day

blessed jointure each to each

pressed each into the other’s ahhhh

So, silenced at your mossed knees

to the forest which makes and remakes

your lust and breath

*holy palmers’ kiss: Juliet to Romeo in Shakespeare’s Romeo and Juliet: “For saints have hands that pilgrims hands do touch,/ And palm to palm is holy palmers’ kiss.” Palmers are pilgrims who go to a sacred site.

(for the students of the Langley School of Fine Arts who came on Oct. 15, 2012 to experience the endangered McLellan Forest, Glen Valley, Langley, BC)

For the graced and gravitied trees

lolling by the Fraser, this green hymn

greening power, stemming from the woods

mossed and tossed from green

for the unabashed tree huggers

who know it takes a village to save a forest

for the tall earth-honouring dream

and the dropping, dripping boughs

for the squadron of teens

into the sacred space to stand

with serenades for the mushroom stairway

for the Councillors who would barter heritage

for a recreation centre elsewhere

singing for hemlock and cedar—

those who long to be re-created

Susan McCaslin is an award-winning poet from Fort Langley, British Columbia, and Faculty Emeritus in English Literature of Douglas College in New Westminster, BC. Her most recent volume, Demeter Goes Skydiving (University of Alberta Press) was a finalist for the BC Book Prize (Dorothy Livesay Award, 2011) and the 2012 winner of the Alberta Book Publishing Award (Robert Kroetsch Poetry Book Award). www.susanmccaslin.ca

Susan’s poem “Border Boogie” will be featured in the complete Alive at the Center anthology as well as the Vancouver edition. Both books are currently available from your favorite local bookshop or online retailer