“Tell us what titles or genres you’ve enjoyed in the past, and we’ll give you surprisingly insightful recommendations.”

In December 2006, many things were happening around the world. NASA revealed photographs supporting the theory of water on Mars, an adult giant squid was captured on video, and the dress Audrey Hepburn wore in Breakfast at Tiffany’s was auctioned to charity for $923,187. Another notable December 2006 occurrence was the creation of the online book catalog and recommendation resource, Goodreads.

Goodreads allows users to keep track of books they’ve read, books they want to read, and the reading journeys of other registered users. Users are able to interact with each other while getting consistent recommendations from both a Goodreads algorithm and the ever-updating feed from their friends on the website or app. While Goodreads is a wonderful resource for readers, it also houses a very lucrative market for indie publishers and authors. Through the Goodreads author program, Q&A groups, word of mouth, and the Goodreads recommendation engine, indie publishers and authors are able to establish a presence among the bigger five guns in the publishing world.

Per Goodreads, the author program is “designed for authors to have a profile on the site and interact with fans, and add photos, videos, or events to their profiles.” Using Goodreads as a sort of social media platform, authors are able to cultivate a following and stay connected with their readers. They can even update readers on what they are reading, since most authors are—at a fundamental level—readers too. Authors can post reviews or favorite quotes, or even create lists of favorite books.

Authors can also host a Q&A group to answer questions and interact with their fans. Any followers of the author are notified via their inbox to submit a question, promoting the new release. There are seven million users on Goodreads and it is very worthwhile for authors (either publishing independently or through an indie press) to interact with them! Another program, Ask the Authors, allows authors to engage with their readers from their author dashboard.

How do books get discovered? This pie chart distinguishes between the various methods Goodreads members use to find books on the site. 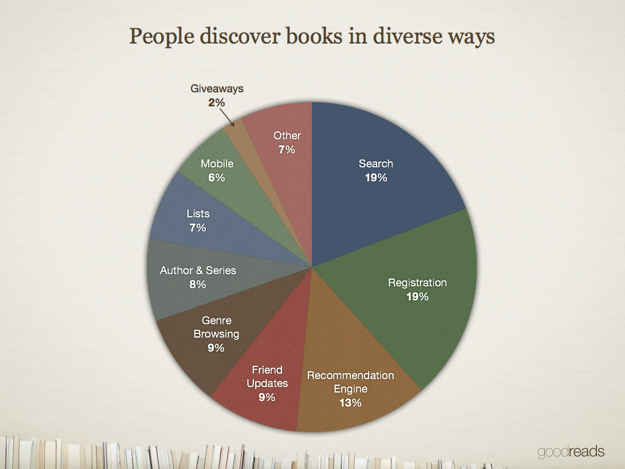 states that they “require such a threshold to guarantee they know enough about a book to be statistically comfortable recommending it.” Ratings and reviews on books, especially indie titles, matter!

Using programs such as LibraryThing and Eidelweiss offer the option to implore early reviewers to review books on websites such as Goodreads. Having a strong baseline of early reviews helps a title tremendously when looking to market it on Goodreads.

Furthermore, Goodreads notes that if there is a strong comparable title to a new release and a publisher or author is able to market their book to the readers of the other title—and the readers respond by adding the new book to their goodreads account—the recommendation engine will notice this correlation and be even more likely to suggest the book to the right readers.

Where do people initially hear about the books they read?

Friends are one of the best methods of new book discovery. 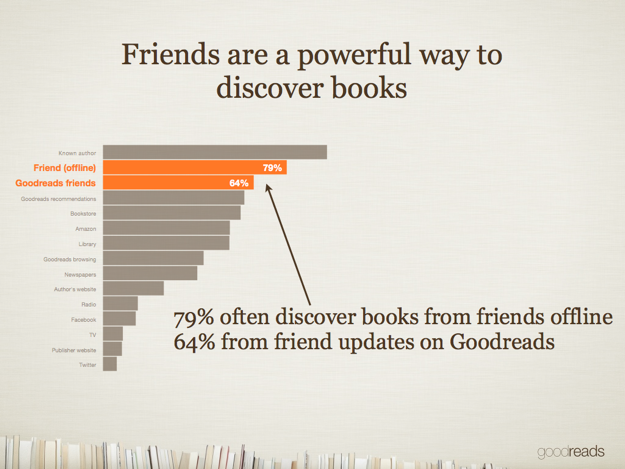